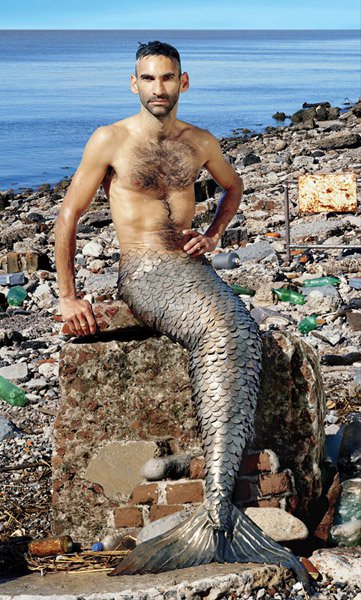 Born in Santa Fe, Argentina in 1958, Marcos López developed an extensive and very personal work along the last thirty years. His work uses multiple sources from the Latin-American imaginary, from the Mexican muralists to soap operas, through advertising and the chromatic histrionics of street propaganda or kitsch mixed with boleros. Really few authors have such an own universe, as recognizable and as incisive as his. His series Pop Latino and his following works –always marked by his personal Latin worldview–, do not only propose substituting alien signing by the mixed race signs that have arisen in the continent in an autochthonous way. The work Sireno del Río de La Plata (The male siren of Río de La Plata), which in this edition is presented in a new location, is in his words “a bad copy of Copenhagen’s Little Mermaid. A metaphor of the outskirts. A male without sex: an illusion that survives in the underdevelopment’s polluted waters”.