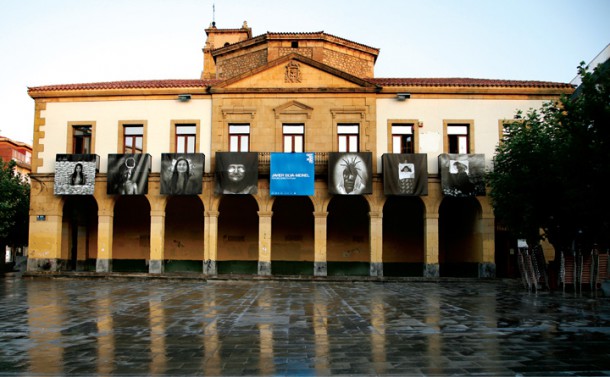 His work is inscribed in what could be said a deeply Andean modality of photography. His portraits recreate in a first interpretation the visual universe of the magic realism, but they open their meaning to the dualities territory; their pictures include, without naming it, the pain after the joy, the quotidian, the political and the religious rites. The series Peruko Erretratuak (Portraits of Peru) questions the western view on one of the stereotypes that has had most importance in the photography’s history: the representation of the exoticism. (A. Castellote)

He possesses a strange gift that lets him transform reality when he watches through the eye of his camera. Perhaps the most amazing aspect of his work is the dialog he has developed with the individuals he portraits. They take part in the photographer’s orchestrated recreation with a natural disposition that reinforces the spirit of the pictures. Their view goes beyond the anthropologic document, activating our imagination because it relates a new reality based on the link between these inhabitants and their environment, especially with their fauna. The pictures remind the bestiary and the fables where mythological beings appear, although it is not with the aim of reflecting a true religious or magic universe. The curious paradox is that when the two different views of the world in the creation of a ritual in front of the camera converge, we achieve a glance of the authentic and mysterious Amazon skin. (Throckmorton Fine Art)

He was born in Lima, Peru, in 1949. He discovered photography meanwhile he studied Economy and in 1971 he decided to dedicate exclusively to it. In his beginnings he dedicated to landscape and commercial photography. In 1984 he got interest in portraits and in catching the Andes and Amazonia rituals, costumes and religious festivities. Silva-Meinel had his first individual exhibition in 1978 in Lima. Since then his work has been exhibited in several galleries and museums around the world. Since 1988 he has published photography books, the last one La piel del Amazonas (Amazon skin). His pictures have been shown in Peru, United States, Venezuela, Brazil, Spain, United Kingdom, Belgium and Holland.