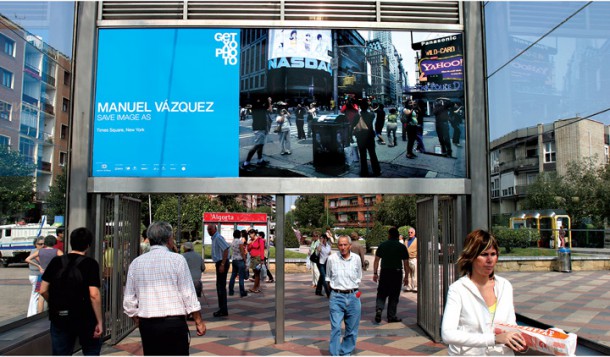 “This project appears from the observation of tourists’ behaviour in their trips. Groups of people walk around tourist spots watching the world through the screen of their digital cameras (…). The activity of travelling has always kept a strong relation with the need of the visual recording. Photography becomes an important source of creation of memory, digital memory. This project tries to document in an image the compulsive photographic behaviour of the tourists, who seem to be scanning the city. The images created are montages placed in the fuzzy border between Fiction and Reality. (…) All the protagonists were there, in the same position, in the same place, but at different instants.” M. Vázquez

GETXOPHOTO invited Manuel Vázquez to take pictures of Bilbao as part of his series Save image as. Vázquez took pictures of the esplanade in front the Guggenheim Museum Bilbao during the summer of 2007. The resulting image was exhibited in the Algorta underground during the first edition of festival.

Manuel Vázquez was born in Bucaramanga, Colombia, in 1976. He is currently living between London and Madrid. He is got a degree on Economy and a master on Photography in the EFTI in Madrid. He has followed courses in the London School of Economics, ICP and the New York School of Visual Arts. He has been coordinator of photographic practising lessons in PhotoEspaña, graphic editor of the agency Contacto and nowadays is working as freelance photographer. He has been awarded several times, for example by the Comunidad de Madrid in 2003 or Generación Caja Madrid Award in 2007. He has exhibited in several Spanish cities, New York and Bogotá.