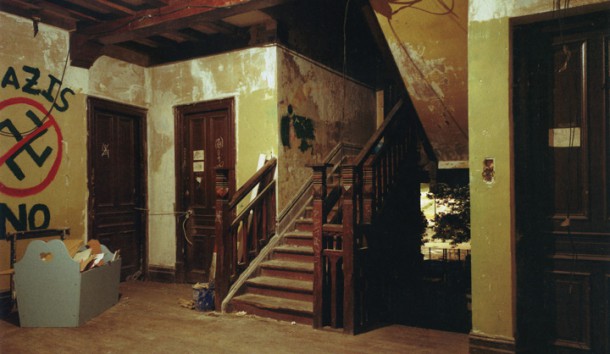 RIGHT HERE
Current transformations which can be seen in a landscape everyday experience. Enclosure and dating the territory for its interpretation. New usage, cultural, territorial and conceptual changes.
The landscape as idea: comprehension of tradition and formal heritage.
The city and its environment. Urban and outskirts scenes, limiting areas, friction points, the disappearing of the place, the memory. Domestication. Categories and models.
New fragmented urban reality, meeting points of different experiences. Achievements and failures of architecture and urbanism, violence carried out in the urban intimacy, abandoning of territories, disharmonies between object and environment, visual aggressions.
Landscape and psychological projection, landscape anthropology, landscape and biography. (M. Eskauriaza)

Satyat Nasti Paro Dharmad is a project structured in four parts. It observes a specific spot in Getxo through a photographic experience which covers from 2004 to 2007.

Mikel Eskauriaza was born in Bilbao in 1969. He got a degree on Fine Arts and a master on the specialization of Contemporaneous Art. He has also studied in the International Center of Photography of New York. In 2001 he got a Grant for the Artistic Creation granted by the County Council of Bizkaia (New York-Detroit-Memphis). In 2003, he got the honour mention from the Generación Caja Madrid Award. In 2004, he got the Resident Artist Award by Bilbaoarte and the 1st position in the Generación Caja Madrid Award. He has exhibited in Bilbao, Vitoria, Basilea, New York, Madrid, Barcelona, Valencia among other cities.